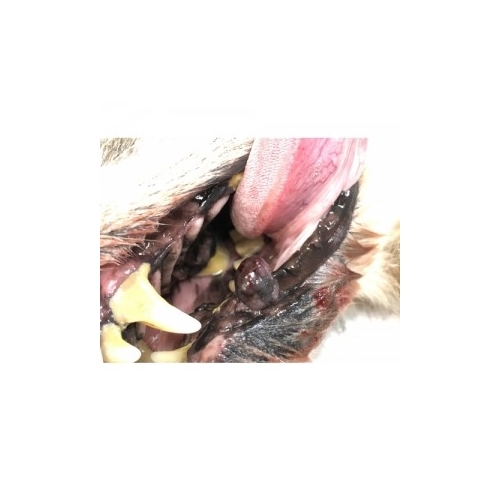 Melanoma is a type of skin cancer. Compared with human melanoma, which is mostly caused by prolonged exposure to ultraviolet rays; the cause of canine melanoma is mainly caused by age, environment, and genetic factors. Canine melanomas are classified according to the location of their appearance, mainly divided into skin melanoma, oral melanoma, ocular melanoma, and subungual melanoma. Among them, oral melanoma accounts for the majority (about 80%) and there are 70-80 % possibility that they are malignant tumor.

Oral melanoma tends to occur in the elderly, more in small dogs, higher proportion in male dogs than female dogs. It grows on the oral mucosa, tongue, gums, upper and lower jaws. It is highly aggressive, has fast metastasis, and has high fatality rate. This type of tumors quickly metastasize to other organs, causing death of dogs. As tumors grow in the oral cavity, it is not easy to detect at the initial stage. Usually when the symptoms appear and the tumors are detected, it has progressed to middle and advanced stages. At this time, if no treatment is given, the average time of survival is only about 2 months.

Currently, the common treatment methods in Taiwan are surgery and chemotherapy control. Surgical resection is the major treatment method. The tumor and the surrounding tissues of up to 2 cm must be removed at the same time. Oral melanoma is highly erosive to the bones, so the affected bone must also be removed. Depending on the location of the tumor, it may be necessary to remove part of the upper and lower jaw. Chemotherapy could be combined with surgery or performed alone for the purpose of controlling the development and metastasis of cancer, but the effect of chemotherapy on oral melanoma is less evident. A new type of treatment is melanoma vaccine, which aims to reduce the chance of metastasis and increase survival time through immunization.

For oral melanoma, attention should be focuses on early detection and early treatment. When the tumor is still small and the symptoms are not evident, it is difficult to detect tumor growth in the dog’s oral cavity. When cleaning dog’s teeth, the owner should also observe whether there are any abnormal lumps in the dog’s oral cavity. Also observe whether when the dog bites toys and eats, there would be any blood stains left behind. Other symptoms of oral melanoma include drooling, difficulty biting or swallowing, loss of appetite, bad breath, nosebleeds or oral bleeding, swollen lymph nodes in head or neck, etc. Owners should stay alert to changes in the behaviors and appearances of their own dogs.

Different types and locations of canine melanoma are:

1. Skin melanoma: appears on the skin

3. Oral melanoma: appears in oral cavity or anywhere around the mouth (accounting for 80% of canine melanomas)