PTS (para-toluenesulfonamide) is a small molecule, chemical anticancer drug independently developed by Gongwinbiopharm. In vitro studies show that, PTS can penetrate the cancer cell membrane quickly once contacting with cancer cells and accumulate in the cytoplasm in a large amount, and the PTS concentration is dozens of times in cancer cells relative to that in normal cells. When PTS enters cancer cells, it will rupture the lysosomes, release lysozyme, and cause necrosis of cancer cells; PTS also induces the cytochrome c release from mitochondria, inhibits ATP synthesis and induces cancer cells apoptosis [1]. The anti-cancer targets and mechanisms of PTS are different from other anti-cancer drugs. Traditional chemotherapy drugs are mainly systemic cytotoxicity and patients often need to suffer the side effects of drugs on normal cells, such as bone marrow suppression, hair loss, rash, vomiting, etc. The characteristic of PTS is that it acts directly on the tumor site with intratumoral injection and its selectivity. Because of the specificity and selectivity, there are no such side effects such as the patients treated with chemotherapy.

The results of animal studies further demonstrate the conclusions from in vitro studies. In the tumor xenograft nude mice model, the tumor weights in the PTS treatment group have 59% reduction compared with the absolute ethanol treatment group using intratumoral injection, and the area of ​​cancer necrosis is 3 folds increase. PTS is also safer than other intratumoral injections. After injection of the same volume of PTS or absolute ethanol into the normal tissues of nude mice, pathological section staining shows that the damage of normal tissues in the PTS treatment group has 60% reduction compared with absolute alcohol treatment group [2]. PTS is mainly metabolized into five metabolites including 4-sulphamoylbenzoic acid via enzymes such as CYP2C, CYP2D and CYP3A. About 80% of PTS can be excreted in the urine within 24 hours, and others are excreted through other ways such as feces or sweat [3,4]。

All available cancer treatments can be essentially broken down into two approaches- systemic treatments and local treatments. Systemic treatments are designed to treat cancer cells in human body by chemotherapy drugs and immunotherapy. Whereas, regional/local treatments including surgery, radiation, and minimally0invasive ablation/embolization, are those that are designed to remove cancer cells where they originated. PTS treatment, one of local treatments, is intratumorally injected to cancer tumor cells via percutaneous puncture by combing bronchoscopy and image-guided equipment (ultrasound or CT). Given the particular nature, PTS treatment is named as “Minimally Invasive Chemical Ablation” and is the very first targeted chemo-ablation in the world. 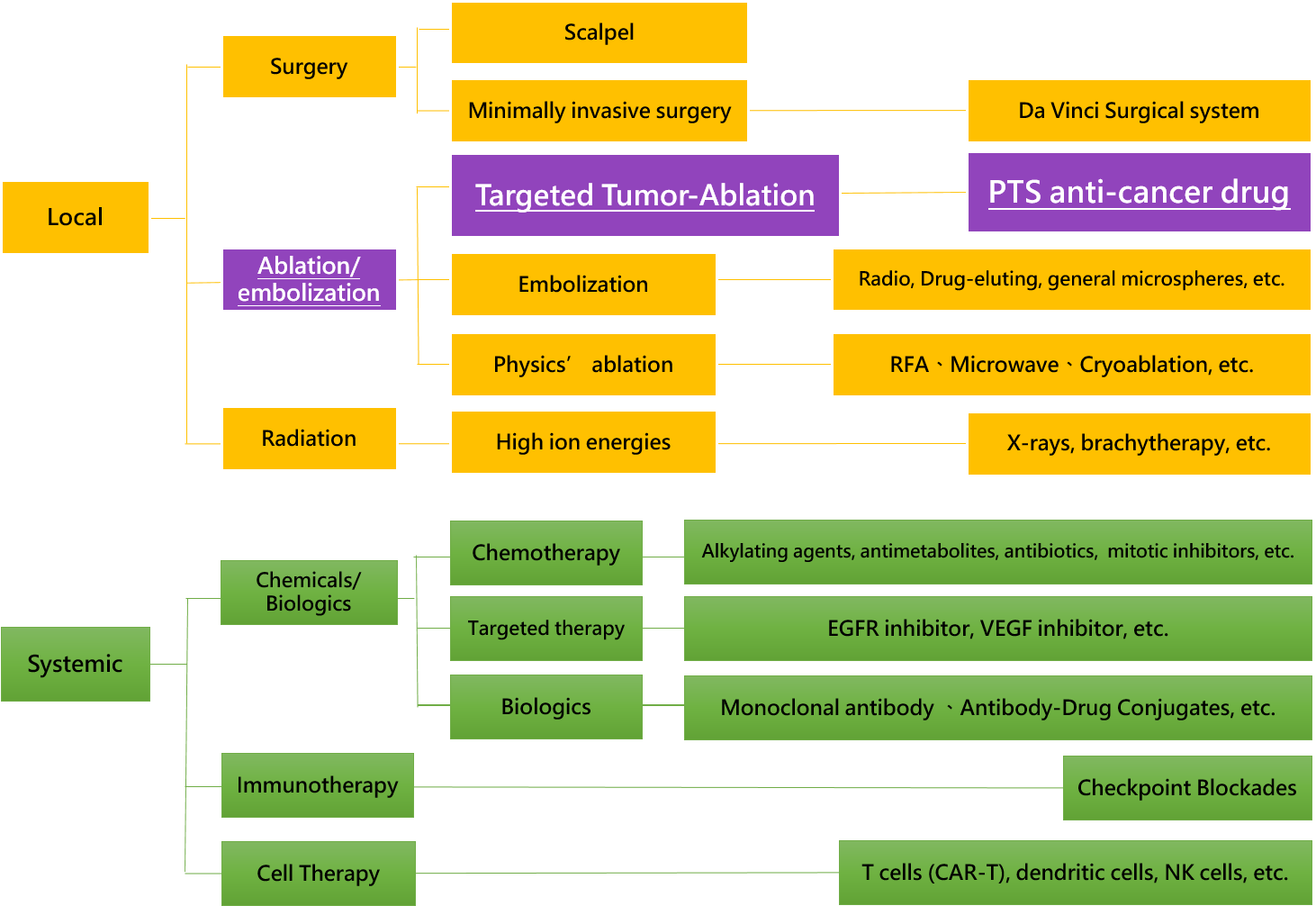